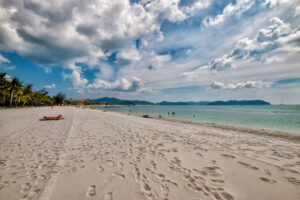 Ministry of Health (MoH) today has announced a list of countries that are now being barred from participating in the Langkawi international travel bubble. The move was done in regards to the outbreak of the new COVID-19’s Omicron variant.

They are generally being divided into two categories. One such group are those that have reported cases of Omicron infections which are noted below:

While foreign nationals coming from these countries will not be allowed to enter the island through the travel bubble, Langkawi residents can still come back to their homes. However, they can’t enter directly into Langkawi.

Instead, they have to fly into KLIA first and go through 14 days of mandatory quarantine. The same policy also applies to Langkawi residents that have a 14-day travel history involving these countries.

On another hand, there are also countries that have been deemed as high-risk even though they have not reported any Omicron cases just yet. The policy that we have mentioned earlier applies to them too:

Health Minister Khairy Jamaluddin announced yesterday that the government would temporarily ban travel to and from countries with a high risk of infections from the Omicron variant, which has been decreed by the World Health Organisation as a Variant of Concern (VOC).

Interestingly, only eight of the countries barred from Langkawi have been imposed with a total travel ban, though the list could change rapidly as it is being updated on daily basis. Khairy also said that foreign tourists who are found to be positive with the Omicron variant will be isolated in private hospitals, with the cost to borne by the travellers themselves.

Langkawi had opened up its borders to foreign tourists on 15 November, the first time in almost two years since the start of the COVID-19 pandemic. Under the travel bubble, international travellers are allowed to land in Langkawi without undergoing quarantine although they have to book a travel package with a Malaysian tour operator registered and licensed with MOTAC, as well as purchase travel insurance and provide a negative COVID-19 RT-PCR test.

The post Here is The List Of Countries Excluded From The Langkawi International Travel Bubble appeared first on Lowyat.NET.