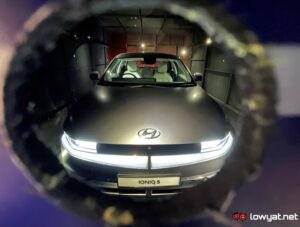 Just barely three months after launching Kona Electric in Malaysia, Hyundai-Sime Darby Motors (HSDM) is about to add another model into its electric vehicle lineup in the form of IONIQ 5. While the company has yet to reveal the exact launch date for the vehicle, you are now able to take a closer look at the actual EV right here in Malaysia.

In a way, the IONIQ 5 which is currently stationed at Hyundai’s roadshow held in 1 Utama’s Old Wing is the first time that the EV is being officially displayed here in our market. Before someone points it out, yes, we didn’t ignore the fact that the Sultan Ibrahim of Johor already has an IONIQ 5 in his extensive collection.

On that note, the IONIQ 5 is not being displayed out in the open at the shopping mall though. You can only take a look at it through the peepholes that are located throughout the massive box that is housing the EV at the roadshow which will last until this Sunday, 6 March.

Despite our best attempt to dig more information at the roadshow, the pricing of the IONIQ 5 in Malaysia is still under wraps at the moment. That being said, HSDM has revealed that the EV can be obtained in three variants through the booking section for the IONIQ 5 on Hyundai Malaysia’s Click To Buy platform.

According to the staff at the roadshow, the Lite and Plus variants will have a rear-wheel-drive layout while the Max option is going to feature an all-wheel-drive layout. Which means, we are most probably looking at up to 384km (WLTP cycle) for the Lite and Plus variants which feature 58kWH battery while the Max option with 72kWH battery may go up to 460km.

The site also noted that both Lite and Plus variants will receive Black Two Tone interior alongside Atlas White and Phantom Black Pearl colourways. There are also Cyber Gray Metallic and Mystic Olive Green Pearl options for the Lite model while those who prefer the Plus model can also opt for Galactic Gray Metallica and Digital Teal Green Pearl.

For the Max option, customers can obtain it in Gravity Gold Matte, Shooting Star Gray Matte, and Lucid Blue Pearl. As for its Two Tone interior, they can choose to have it in Gray or Dark Green, if they don’t the standard Black is for them.

Even though its local pricing has yet to be revealed, those who are interested to be among the first to own the IONIQ 5 in Malaysia are able to reserve it with a booking fee of RM1,000 through Hyundai Click to Buy platform right here. We will keep you posted once we hear further updates from HSDM, so stay tuned.

The post Here Is Your First Official Look At Hyundai IONIQ 5 EV In Malaysia appeared first on Lowyat.NET.