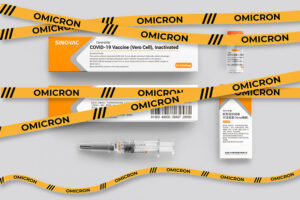 The study revealed that neither the Sinovac nor the Pfizer-BioNTech vaccines generate enough neutralising antibodies to fight Omicron with only two doses, although Pfizer has already revealed that a booster of its mRNA vaccine induces enough antibodies to fend off against the new variant. The Hong Kong research found that giving Sinovac recipients the German jab achieves the same effect, whereas Sinovac boosters failed to do so.

Sinovac’s CoronaVac is one of the most-used vaccines in China and in developing countries, with more than 2.3 billion doses produced and shipped out. In Malaysia, Sinovac shots make up 36.6% of all vaccines used, according to COVIDNOW.

Even before the Omicron variant was discovered, the efficacy of the China-made vaccine had already been scrutinised and found to wane much faster than Pfizer or AstraZeneca. This discovery, along with the threat of Omicron, had prompted the government to make boosters a requirement for Sinovac recipients to maintain their fully vaccinated status.