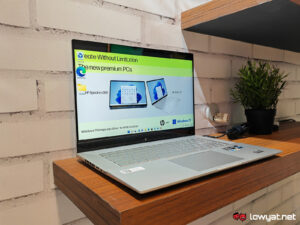 HP has officially brought over one of its latest and most powerful laptops to Malaysia, the HP Envy 16. The laptop, which was introduced back in May, features the latest 12th Gen Alder Lake CPU and Arc Alchemist mobile GPU from Intel.

Under the hood, the laptop can be configured with either an i5 or i7 12th Gen Intel chip with 16GB of RAM and 1TB of storage. As for the GPU, the i5 version comes with an Intel Arc A370M while the i7 model can be fitted with either the Arc mobile GPU or an NVIDIA GeForce RTX 3060 for the top-tier variant.

HP places a lot of emphasis on the Envy 16’s webcam, which is a 5MP camera with an infrared sensor and a privacy shutter that comes with an arsenal of features for video conferencing. It has built-in software for noise reduction, auto-framing, a beauty filter, and a ring light. It is also equipped with speakers made in collaboration with Bang & Olufsen.

The brand claims that the Envy 16 can last up to 16 and a half hours with video playback. It is powered by a 83Wh battery and comes with a 150W power adapter, which the company says can charge the computer from 0 to 50% in just 30 minutes. Connectivity-wise, the laptop supports the latest Wi-Fi 6E and Bluetooth 5.2.

The HP Envy 16 starts at RM6,999 for the base model that comes with an i5 and an Intel Arc GPU. Moving up, the i7 variant with Intel Arc costs RM7,549 while the highest-end version with an i7 and an RTX 3060 is priced at RM8,459. The new laptop can be bought at HP Concept stores, HP’s website, and authorised resellers.