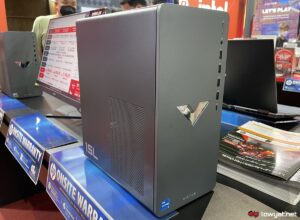 Originally introduced to the world during CES eight months ago, the HP Victus 15L gaming desktop has finally made its way to Malaysia. Just like the Alder Lake-based HP Omen 16 and Victus 16 gaming laptops that we reported earlier, it is unclear when exactly the company released the gaming monster in our market.

This is because we were not aware of its existence in Malaysia until we stumbled upon the desktop machine alongside both gaming laptops at Thunder Match Technology’s HP booth during last weekend’s Malaysia IT Fair. We then cross-checked the model with HP Malaysia’s online store and found it there as well.

According to the site, the current base model is running on Intel Core i5-12400F alongside a 512GB PCIe NVMe solid drive that HP has sourced from Intel too (surprise!). It also features dual-channel 8GB DDR4-3200 RAM and NVIDIA GeForce GTX 1650 graphics card together with a price tag of RM3,899 although the machine was offered by Thunder Match at its Malaysia IT Fair booth for much less at RM3,499.

Moving on, there is also the variant with Core i7-12700F which has similar RAM and SSD configuration but comes with the more powerful GeForce RTX 3060 graphics card instead. This particular option carries a price tag of RM5,899.

On the other hand, you can also choose to have the similar-spec unit that has an AMD Ryzen 5 5600G processor instead. This variant is much more affordable at RM4,799 although the desktop is currently being listed on HP Malaysia’s online store for RM4,659 while Thunder Match sold it for even lower at RM4,499 last weekend.

In case you are not aware of it, AMD did not release the Ryzen 6000 Series processors for desktop machines which is why the Ryzen-based Victus 15L gaming desktop is still running on a Ryzen 5000 Series chip. Instead, the company has decided to bring the Ryzen 7000 Series which has just been announced today, to the desktop segment instead and let the 6000 Series be a mobile-focused release.

Do note that all of these Victus 15L gaming desktops also come with a 500W 80 Plus Bronze power supply as standard together with HP 310 wired keyboard and mouse. However, you do need to purchase your own monitor in order to utilize them.

The post HP Victus 15L Gaming Desktop Made Its Way To Malaysia appeared first on Lowyat.NET.