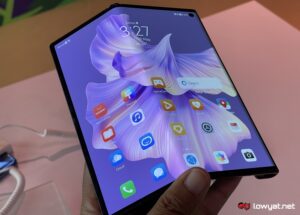 Just a day after the foldable phone was launched for the global market, the brand-new Huawei Mate Xs 2  has now made its official debut in Malaysia. The new model is essentially the second foldable device that the Chinese giant has launched in our market after the P50 Pocket earlier this year.

If you missed our earlier report, the Mate Xs 2 is running on the 4G variant of the Qualcomm Snapdragon 888 processor alongside 8GB RAM and 512GB internal storage. Equipped with a 7.8-inch OLED 120Hz display that also has a maximum resolution of 2480 x 2200, it can be folded into a 6.5-inch screen with 2480 x 1176 resolution.

Despite having a rather large footprint due to its foldable nature, the phone is actually lighter than one might expect at only 255 grams. Alongside the phone’s signature Falcon Wing Hinge design, Huawei also claimed that Mate Xs 2 is up to 2.5 times more resistant to drop when compared to the 2020’s Mate Xs.

On its back, the phone carries a 50MP f/1.8 main camera in addition to a 13MP f/2.2 ultra-wide camera, and an 8MP f/2.4 telephoto camera. The Mate Xs 2 also has a 10.7MP f2.2 selfie camera on the top right corner of its screen but users can also turn on the secondary display mode and utilise the higher-quality feature any of the three rear cameras to capture selfies.

To power the phone, Huawei has equipped the Mate Xs 2 with a 4600mAh battery and has also provided it with the capability to support the 66W Huawei SuperCharge charger. In terms of pricing, the new foldable phone will be available for RM7,999 which is definitely way lower than the RM11,111 launch price tag for the Mate Xs back in 2020.

The pre-order program for the Mate Xs 2 which will include Huawei Watch GT 2 Pro as a freebie will take place from 3 to 23 June via Huawei Malaysia eStore as well as its official Lazada and Shopee stores. Alternatively, consumers are also able to get their hands on the phone through Harvey Norman, Senheng and senQ stores.