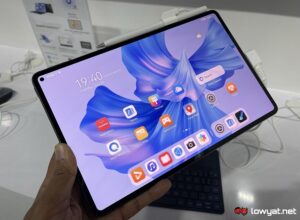 Alongside the MateBook 16s and MateBook D16, Huawei has also launched its latest high-end tablet, the MatePad Pro 11, during its APAC Smart Office launch event in Bangkok. The new device is the beefed-up successor to last year’s MatePad Pro, with a brand new camera arrangement, more powerful internals, and the brand new HarmonyOS 3.0.

The MatePad Pro 11 features a smaller 11-inch 120Hz OLED display with a resolution of 2560×1600 and a sub-1 Delta E’s colour accuracy rating, capable of producing 1.07 billion colours. The tablet is only 5.9mm thick and weighs 449g, which made Huawei bold enough to claim it as the lightest 11-inch tablet around.

For those of you who enjoy tablet photography, the MatePad Pro 11 sports two cameras on the back comprised of a 13MP main shooter and an 8MP ultrawide. For a better video calling experience, it also comes with a total of six speakers and four microphones for echo cancellation, with a 16MP camera up front.

Of course, a high-end tablet has to come with powerful accessories to complement the device. It is compatible with the second-generation M-Pencil stylus and a new detachable Smart Magnetic keyboard. The Bluetooth keyboard charges wirelessly when connected to the tablet, functions as a stand, and has a hidden floating antenna to boost signal connectivity.

The Huawei MatePad Pro 11 is powered by an 8,300mAh battery, which is significantly lower compared to its predecessor’s larger 10,050mAh battery. That being said, the logic behind the move is understandable considering the tablet’s overall smaller size.

Additionally, the company noted that the tablet offers a battery life of up to 11.5 hours when playing videos and 8.5 hours when web browsing, which is not too shabby.

The charging is one of the areas where the tablet gets an upgrade, with the Snapdragon 888 version supporting 66W charging and the Snapdragon 870 model supporting 40W charging. However, it only comes with a 40W and 22.5W charger respectively out of the box. If users want the full 66W/40W charging speed, they will need to purchase a SuperCharge charger separately.

The pricing for the Huawei MatePad Pro 11 has still not been revealed, but the tech giant will be launching the new tablet in Malaysia next month. Pre-orders will open up on 19 August and it will officially go on sale starting on 27 August.