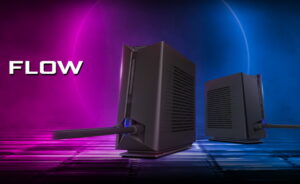 Illegear has recently unveiled an external liquid cooling system that is designed to increase the CPU and GPU cooling capability for selected gaming laptops. Aptly called Flow, the company claimed that this cooling solution requires a very minimal setup given its plug-and-play nature.

This is made possible by the self-sealing quick-release connector that has been equipped to the tubes on the Flow. Inside its enclosure, the Flow also carries a 120mm x 25mm fan and a 120 x 27mm aluminium G1/4 12-pipes radiator alongside a pump that has a head pressure rating of 2.3 meters as well as a flow rate of 220 litres per hour.

Illegear has also noted that the Flow uses distilled water as its cooling fluid and is powered directly by the laptop’s power supply. Furthermore, it does not occupy any of the laptop’s I/O ports as the liquid cooling system is controlled wirelessly via Bluetooth.

Once connected, users can check out the Flow’s fan and pump status inside Illegear Command Center software. From there, they can also tweak the fan’s performance profile as well as the system’s RGB LEDs.

When it comes to performance, Illegear claimed that the Flow can help shave between 15C to 20C off the usual operating temperature. The reduced temperature would also lower the workload faced by the laptop’s fan and allows them to operate at a slower speed.

Illegear said the fan speed can be reduced to as low as 50% when a compatible laptop is plugged into the Flow. Subsequently, a slower fan speed also means a lower noise level as well.

At the moment, the cooler is only compatible with Illegear Onyx G and Selenite X models that have 12th Gen Intel Core processors in them. Available directly from the company’s website for RM599, you can obtain it for slightly less at RM570 if you pay by cash over at its showroom in Oval Damansara, 1 Tebrau Johor Bharu, and Bay Avenue Penang.