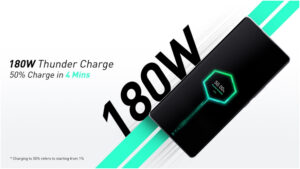 Infinix has announced its new Thunder Charge technology that is capable of juicing up a phone at a whopping 180W, surpassing the 160W charging concept phone it revealed last year. The technology is so fast that the company is claiming that it can charge a 4500mAh battery from 1% to 50% in just four minutes.

According to Infinix, most companies use batteries with a charge rate of between 1C to 3C for their fast-charging systems. Thunder Charge, on the other hand, apparently uses batteries with a rate of 8C which the firm claims reduce the chances of overheating.

Another design that it incorporates to reduce heat and increase longevity is by using two batteries charging at 90W each instead of a single battery, a common solution used by phones with high charging speeds. Additionally, phones featuring Infinix’s technology will only be able to utilise the 180W Furious mode when using the Thunder Charge cable that has a built-in encryption chip.

The charging adapter uses Gallium Nitride (GaN) and is compatible with multiple fast charging protocols that enable it to charge smartphones from other brands, as well as tablets and laptops, up to 100W. Users can also charge Infinix phones with cables from other manufacturers, although it will be limited to either 60W or 100W.

Infinix says that the Thunder Charge technology will debut in certain flagship phones that will be announced later on in the second half of this year. Notably, it will likely become the fastest commercially available charging speed for smartphones when it comes out, barring any rollouts of faster speeds from other companies beforehand.

The current record holder is OPPO’s 150W SuperVOOC which is available in a handful of OnePlus phones and realme’s similar 150W UltraDart charging technology. OPPO has demoed 240W charging while Xiaomi has also showcased 200W charging, though neither brand has announced when it will land in consumers’ hands.