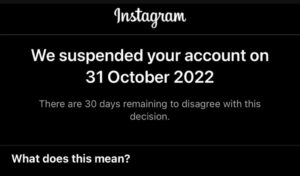 If you suddenly found yourself being suspended by Instagram without any explanation, don’t panic. As it turns out, throngs of Instagram users are facing the same issue for the past few hours.

According to DownDetector, the number of reports from users started to rapidly increase slightly after 8:30 PM Malaysian time before peaking out at more than 7,600 reports at around 10:08 PM.

The number did steadily decrease after that although the figure was still quite significant at 1,312 reports according to our last check at 12:23 AM. Instagram itself has admitted through a post on the official Twitter account for its communications team at 10:14 PM that some users were indeed facing some access issues.

However, there are still no updates from the team even at the time this story is published. At the same time, it is also quite hard to ignore the #InstagramDown hashtag on the post.

We’re aware that some of you are having issues accessing your Instagram account. We’re looking into it and apologize for the inconvenience. #instagramdown

Let’s not forget that just a week ago, fellow Meta subsidiary WhatsApp has encountered an outage that lasted for a few hours. Unlike what happened in 2021, neither WhatsApp nor Meta has yet to make any in-depth explanation in regard to the downtime that surely caused havoc among some of its users throughout the world.

Of course, what Instagram going through right now is not on the same scale as WhatsApp’s outage last week. Nevertheless, there might be some users out there that are wondering what is going on at Meta these days especially given the back-to-back disruptions on two of its major services.

Some may even wonder if Facebook will be the next Meta platform to experience a major outage. Meanwhile, we will update this story if there is any update regarding the situation although it is possible that Instagram or Meta choose to keep it quiet once again just like what happened to WhatApp last week.

The bug that plagued its operation last night has since been squashed, according to a new update by the Instagram communications team. As per what we expected earlier, the social network did not provide any in-depth details regarding the bug itself.