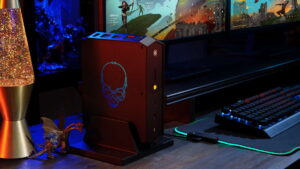 Months after it was first spotted in China, Intel has finally made this machine official. Previously codenamed as the Serpent Canyon, say hello to the Intel NUC 12 Enthusiast system.

Those who followed the progress of the Intel NUC division may have noticed the codename style and the skull logo on the machine’s chassis – both are common traits of high-performance NUC offerings. For example, we recently spotted Intel NUC 12 Extreme mini PC on display in Malaysia which has a similar skull on its chassis and was codenamed Dragon Canyon.

Unlike the Extreme variant which utilizes the 12th Gen Intel Core desktop processor and supports a full-length desktop graphics card, Intel has utilized laptop’s processor and graphics for the Enthusiast model though. Specifically, the mini PC and kit have been equipped with an Intel Core i7-12700H processor as standard.

For graphics, the NUC 12 Enthusiast depends on the Intel Arc A770M Graphics which is accompanied by 16GB of GDDR6 VRAM. This particular factor has made it the first NUC offering to feature an Intel Arc GPU.

Regardless of whether you choose the barebone kit which requires you to sort out its memory, storage drive, and operating system on your own or the fully decked mini PC option, both variants of NUC 12 Enthusiasts still feature Intel Killer Wi-Fi 6E AX1690i and Bluetooth 5.2 combo adapter alongside Intel-powered 2.5Gb Ethernet port.

Other than that, both of them also offer an HDMI 2.1 port, two DisplayPort 2.0 ports, two Thunderbolt 4 USB4 Type-C ports, and six USB-A 3.2 Gen2 ports. Not to forget, there is also a dual-mic array with beam-forming capability, a front-mounted infrared port, and an SDXC card reader that supports the UHS-II standard.

The NUC 12 Enthusiast mini PC and kit also come standard with a 330W power supply and a vertical stand. If you choose to obtain the mini PC system, it will be equipped with 16GB dual-channel DDR4-3200 RAM and 1TB PCIe Gen4 NVMe solid state drive although we reckoned Intel’s retail partners may have their own set of configurations for it.

Price-wise, Intel said that it ranges from USD1,180 (~RM5,374) to USD1,350 (~RM6,148) depending on specific configurations. Although the company has set late September as the NUC 12 Enthusiast’s general release date, it is not known whether the NUC will be released in Malaysia anytime soon.