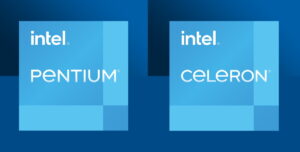 Intel has announced that the company will stop using the Pentium and Celeron branding for notebooks processors starting in 2023. At the moment, both brandings are being used for Intel’s entry-level offerings as the higher-end products are being represented by the Intel Core branding which itself has several tiers from Core i9 to Core i3.

The discontinuation of both brandings does not mean Intel will no longer offer entry-level products though. The company is still committed to producing such processors although they will all fall under a new branding which is simply called Intel Processor.

Intel has noted that the discontinuation of Pentium and Celeron branding will not affect existing processors. This means you are still going to see them around as long as they continue to be available in retail stores.

This is a developing story. Please refresh for the latest update

The post Intel Pentium and Celeron Branding To Be Discontinued In 2023 appeared first on Lowyat.NET.