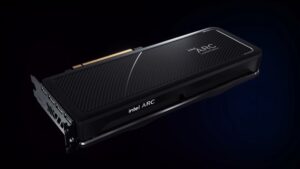 Earlier this year, we saw Intel officially give its ARC Alchemist discrete GPUs the (sort of) fanfare it had long been waiting for. However, after an information draught that spanned several months – the recent publication of the desktop graphics cards’ specifications notwithstanding – and multiple inside sources saying that the series’ performance isn’t quite up to par, new information now says that Intel could be scrapping its graphics initiative, altogether.

The new rumours come by way of popular TechTuber and rumour monger, Moore’s Law is Dead (MLID), and this time around, the man seems to have shored up a huge amount of salt on ARC from Intel’s rusty plumbing. Supposedly, insiders within the company have “confirmed” that the chipmaker has come to a decision to cease and abandon its efforts in making any further iterations of the GPUs series. According to MLID’s sources, they more or less confirmed that “ARC is finished” and that “the decision has been made” internally.

As to why Intel may have come to this decision with ARC, MLID clarifies that it isn’t because Intel isn’t scared of competing against the two tech giants, NVIDIA and AMD, in a market that those two have long dominated. Well, NVIDIA more than its Team Red counterpart, if we’re to be precise. Rather, it’s because of a financial issue, among other issues, that the chipmaker has decided to pull the plug on the whole initiative.

So, what does this mean for the rest of the planned ARC series after Alchemist? Well, MLID says that once Alchemist makes its way out to the hands of gamers, Battlemage is either going to be a series of single low-end to mid-range graphics dies, while its 3rd generation Celestial series may not even get a chance to shine. If the rumours ring out to be true, it would truly be a real pity; we’ve genuinely been anticipating the arrival of Intel’s own dedicated GPU, not in so much as hoping that there is a chance that it would be a real contender to Team Green and Team Red. But rather, as another viable option for gamers seeking out an alternative to GeForce or Radeon.

The post Intel Rumoured To Be Killing Off ARC Desktop GPUs appeared first on Lowyat.NET.