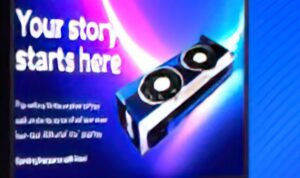 Renders of what could possibly a new cooler shroud design under Intel’s ARC Alchemist desktop GPUs have made their way online. As for where the original renders were spotted, it actually comes from an interesting place: they were from renders within the chipmaker’s plans for an ARC gaming truck.

Here’s how it went down: information about Intel’s plan on creating an ARC gaming truck was first posted inside the official Intel Insider Discord server, where participants and members of the channel were treated to inside information (obviously) to what the chipmaker has planned for LANfest, scheduled to take place in September.

Now, usually, this sort of information would be kept under lock and key by Intel, but based on the tweet by an Evan Stenger (@TheMalcore), it’s clear that the existence of the ARC Gaming truck isn’t a closely guarded secret. To be clear, this isn’t a bus but a full-sized truck. More to the point, it is a full-on container lorry that has been kitted out by Intel to comfortably accommodate several individuals inside.

Looks like @IntelGraphics will be taking ARC on the road in a mobile gaming café.

As for where the alleged new ARC GPU design was spotted, you can actually see if in the background on one of the wall-mounted TVs. Granted, it’s fairly difficult to make out and there do not appear to be any close-up or clearer shots of the graphics card in question. However, based on what is being screened, you can tell that the new cooler shroud closely resembles that of the reference designs of AMD’s current Radeon RX 6000 series graphics card. Moreover, it also looks as though the card is going to be a bit of a chunky monkey, if the side of the card is anything to go by.

For another matter, the shape of the card clearly looks nothing like the ARC Limited Edition Desktop GPU that Intel teased back in March, but then again, there’s a reason why the term “Limited Edition” is being used here. For all we know, the image of the card being shown on the party gaming truck could be what a mid-range or high-end standard edition ARC GPU will look like upon availability.

Beyond that, additional details seem to suggest that the Intel has roped in both SteelSeries as sponsors for peripherals, while the display and gaming monitor maker, AOC, is expected to provide the ARC gaming truck with gaming monitors. And the Germany-based gaming chair maker, BackForce, will be providing pairing each gaming system with a chair of its own making.

As for LANfest, the event is set to kick off in the state of Colorado, from 30 September until 3 October.