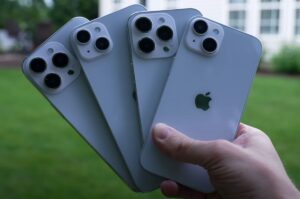 A recently uploaded video on YouTube via the iUpdate channel gave viewers another look at the highly anticipated iPhone 14 series. That line-up, by the way, comprises the iPhone 14, 14 Max, 14 Pro, and 14 Pro Max.

From what was shown in the video, the dummy units used were some of the true-to-life models. As showcased, the iPhone 14, as well as the 14 Max units, have notch designs that are identical to one another. The 14 Pro and 14 Pro Max, however, were rumoured to eliminate the notch and substitute it with a hole punch and pill-shape cut-out front camera.

Not to mention, based on the video, the regular iPhone 14 looks nearly identical to its predecessor, the iPhone 13, and the 14 Max is just a maximized version of itself. In the aspect of design, there is, quite frankly, nothing distinctively new except, of course, the sizes of said devices.

Despite major similarities in display, Sam Kohl, otherwise known for his YouTube channel iupdate, specifically claimed that he believes the iPhone 14 Max will be “the most popular model by far”. The reason behind this is because, Kohl believes, that it will be the first time the particular size will be offered under US$1000 (~RM4416) and with the two rear cameras, “it just feels right,” he says.

It is also worth mentioning that both the 14 Pro and 14 Pro Max are expected to feature Apple’s new A16 Bionic processor that was unveiled earlier this year, accompanied by 6GB of faster LPDDR5 RAM.

In addition, the rumours also suggested that the variants of the iPhone 14 Pro may possibly host a larger 48MP main camera as its lens sizes are bigger compared to the iPhone 13 Pro. Having said that, the variety, excluding the mentioned Pro, may not possess the specified spec, so it might be best to lower  your standards before Apple makes an official announcement on the feature.

Irfan Iskandar contributed to this article

The post iPhone 14 Dummy Units Video Shows Off What Could Possibly Be appeared first on Lowyat.NET.