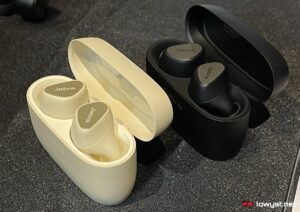 Unveiled to the world earlier this month at IFA, Jabra today has officially launched its new Elite 5 true wireless earbuds in Malaysia. As noted in our previous report, the new model is being positioned between the series’ entry-level offering Elite 3 and the high-end Elite 7.

In general, the Elite Series is designed for users that require all-day connectivity. In regards to that, the Elite 5 has a battery life of up to 7 hours for the earbuds themselves with ANC turned on. Without ANC, the buds can go even further with a maximum operational time of 9 hours.

With the charging case which also supports Qi wireless charger, the total battery life that Elite 5 is able to offer is 28 hours with ANC or 36 hours when ANC is deactivated. The new model also has a quick charging feature whereby users can obtain 1 hour of playback with just 10 minutes of charging time.

In terms of hardware, the Elite 5 is equipped with 6mm speakers alongside the support for AAC, SBC, and Qualcomm aptX codecs. The new earbuds also feature six microphones each to help deliver its Hybrid Active Noise Cancellation (ANC) and voice calls features.

Due to the way that the Hybrid ANC feature is designed which utilizes feedback microphones inside the earcup and feedforward microphones for the outside, its performance is less susceptible to the way that users position the Elite 5 in their ears. Jabra also noted that the feature can help suppress a wider range of noises for both calls and audio listening.

Furthermore, Jabra noted that the external microphones on Elite 5 are active all the time while the internal microphone would automatically spring up to life during windy conditions to ensure that users’ voices remain clear during a call. As per what you may expect from ANC earbuds these days, the Elite 5 also features HearThrough technology that allows users to hear their surroundings without removing the buds.

Each of the earbuds also features a physical button that can be used for calls and playback control as well as ANC and HearThrough features. Users can also choose to enable the Spotify Tap feature that allows them to quickly play music from the streaming service just by tapping the Elite 5’s button.

With the help of Bluetooth Multipoint, the IP55-rated TWE which supports Bluetooth 5.2 is able to connect to two devices at a time. The Elite 5 also supports Google Fast Pair for Android and Microsoft Swift Pair for Windows while it also can work with Google Assistant, Siri, and Amazon Alexa.

In Malaysia, the Elite 5 can be obtained in either Titanium Black or Gold Beige with a price tag of RM699. You should be able to spot the new TWE at reputable dealers across Malaysia or you can purchase it directly through Jabra’s official Lazada and Shopee stores.

The post Jabra Elite 5 Goes Official In Malaysia: Offers Up To 36 Hours Of Battery Life appeared first on Lowyat.NET.