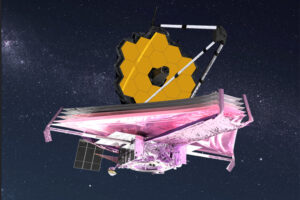 The James Webb Space Telescope is a marvelous tool, succeeding the Hubble Telescope in being the most powerful space observatory. NASA has shared a number of very pretty images taken by the telescope, as well as image comparisons to its predecessor. But despite the highly detailed images, the telescope itself has a very small SSD to store them, at least when compared to what the average consumer is used to.

Compared to the hundreds of gigabytes that the average consumer grade SSD can hold, the one aboard the JWST only has a 68GB SSD. But to be fair, it’s not just any old SSD, and to say that it was built differently would be an understatement. After all, this Solid Stare Recorder, as it is referred to, is also made to withstand the radiation of space.

If you think that despite its radiation shielding, 68GB is still not a lot of space for the highly detailed images that the JWST captures, you’ll be right. That being said, it’s still a major improvement over what the predecessor Hubble had on board, which is a much more humble 2GB of storage space.

The new space telescope can produce up to 58.8GB of image data a day. These are sent to NASA on a daily basis, before being purged from the telescope’s own storage banks so that it can capture more space imagery.

Naturally, not all of the 68GB of available space on this special SSD is used to hold image data. Up to three percent is reserved for engineering and telemetry data storage. And over its 10-year life span, with its constant write cycles, the amount of available space will go down to 60GB.

As to why a larger capacity storage device was not chosen, it may have something to do with when the building of the James Webb Space Telescope started. The first contract for the manufacturing of the space telescope was all the way back in 2003.