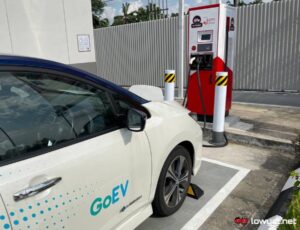 GoCar and EV Connection today announced a new partnership which will see the latter’s JomCharge network of EV chargers to be integrated into the GoCar app. This is being done not only for the benefit of GoCar’s GoEV customers but also for general EV users.

For the first phase of the integration which is expected to be done within Q3 this year, EV owners can utilize the GoCar app to locate JomCharge chargers. The app will also display related information regarding them including charger types and availability.

In the near future, both companies have planned to allow users to pre-book JomCharge chargers via the app. Additionally, they can use the GoCar app to check out the charging progress for their EV and pay for the charging fees.

Aside from the integration of their mobile platforms, GoCar and EV Connection are also looking into other potential collaborations as well. Nothing is set in stone yet but among the areas that were listed in today’s announcement include EV battery recycling, EV charger solutions, and data sharing.

While GoCar was not the first to offer EV rental service in Malaysia, its GoEV service which was first launched in December 2021 is the only app-based EV sharing service in the country at the moment. Another major car-sharing service, SoCar did offer Renault Zoe between late 2019 and early 2020 through a collaboration with Tenaga Nasional but we were made to understand back in February this year that the EV is no longer part of SoCar’s current offering.

Meanwhile, each GoEV’s vehicle is inclusive of a ChargEV access card and allows customers to plug into more than 300 charging points nationwide but the majority of them are slower AC chargers. Hence, the integration of the JomCharge network into GoCar’s app will make things pretty handy since this would likely allow users easier access to the faster DC chargers operated by EV Connection.

On the other hand, today’s announcement in a way marked yet another major collaboration for EV Connection. Just two months ago, the company became the first EV charging provider to be onboard Setel which is the fintech app that belonged to Petronas and we recently have also reported that the JomCharge app can be used to activate EV chargers operated by another Petronas subsidiary, Gentari.