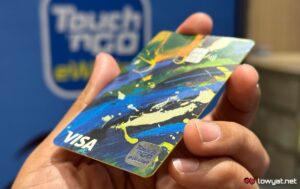 The Minister of Domestic Trade and Cost of Living, Salahuddin Ayub revealed via his official Facebook page that the previously announced task force from his ministry (KPDN) met up with Touch ‘n Go representatives earlier today. As a result of the meeting, the company have been asked to implement six different actions as soon as possible including rebranding the newly launched Touch ‘n Go eWallet Visa card.

Salahuddin said that the company must not use the Touch ‘n Go branding on the Visa card to avoid confusion among consumers as TNG is too deeply associated with toll and public transportation payment systems. As per what we have reported before, the new Visa card is not able to perform these transactions which are the staple functions of a traditional TNG card.

During the card’s launch event, CEO of TNG Digital Alan Ni revealed that the company originally intended to combine the traditional TNG functionalities into the new Visa card. However, it was forced to abandon the plan after the company discovered that the TNG NFC and Visa payWave were not able to co-exist on the same card due to interferences.

In addition to the Visa card’s rebranding, the company has also been directed to increase the number of TNG sales and service centres. At the moment, there are only two such centres in existence which are located on the ground floor of TNG’s corporate headquarters in Bangsar South as well as the TNG Hub at the Nu Sentral Shopping Mall in KL Sentral.

In the same statement, Salahuddin also revealed that e-commerce operators have been directed to take down all TNG card listings made by unauthorised third parties. At the same time, the minister warned that KPDN’s Enforcement Division will be taking legal action under the Price Control and Anti-Profiteering Act 2011 (Act 723) against scalpers that are selling TNG cards above their original price.

KPDN’s task force has also directed TNG to provide early notification to users before their TNG card expires. The company also need to expedite as well as improve its refund and balance transfer process.

The meeting also involved representatives from the Ministry of Works (KKR), Malaysia Competition Commission (MyCC), and Malaysian Highway Authority (LLM) according to Salahuddin. As noted before, KPDN’s task force is being chaired by the KPDN’s Seceretary-General, Azman Mohd Yusof.

This is a developing story. Please refresh for the latest update.