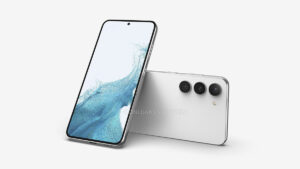 Those keeping up with all things tech would know that it’s already the last quarter of the year when leaks for Samsung’s next generation flagships have begun appearing online. Sure enough, almost like clockwork, tech insider Steve Hemmerstoffer (aka OnLeaks) has released a set of CAD renders which allegedly depicts not one, but two of the South Korean tech giant’s upcoming top-end smartphones – namely, the vanilla Galaxy S23 and the Galaxy S23 Plus.

As usual for most first wave leaks provided by Hemmerstoffer, we’re only treated to a set of images that reveal the designs of both devices in multiple angles, while details for specifications are kept at a minimum. Based on the renders, it is suggested that both the standard and Plus variants of the Samsung Galaxy S23 will sport the same design.

More specifically, the duo are shown to feature flat displays, the S-series’ traditional curved frames, and a completely redesigned rear panel. In regards to the latter, the protruding camera island from the previous series has supposedly been replaced with a more straightforward and clean vertical arrangement – making both models to almost resemble the camera array on the Galaxy S22 Ultra instead.

Hemmerstoffer claims that the standard model of the Galaxy S23 measures at 146.3 x 70.8 x 7.6 mm in size, and will feature a 6.1-inch display with a tiny top-centred camera cutout. Meanwhile, the slightly larger Plus variant comes in at 157.7 x 76.1 x 7.6 mm, and is equipped with a 6.6-inch display with the same camera cutout placement as its smaller sibling. On the back, both devices are shown to sport a triple camera setup, which fellow leakster Ice Universe suggests will feature an improved 12 MP sensor as well as the same 10 MP telephoto as their predecessors.

As for the Galaxy S23 duo’s internal hardware, that’s still anyone’s guess for now. That being said, it is only natural to assume Samsung will equip the two with either Qualcomm’s upcoming Snapdragon 8 Gen 2 chipset or a new generation of its very own Exynos flagship processor.

Unfortunately, the leakster did not reveal anything related to the Galaxy S23 series’ Ultra model, though it’s possible that he’ll only provide it at a later date. In terms of specifications, unofficial sources believe that the top-of-the-line variant will come with the Snapdragon 8 Gen 2 chipset and S-pen integration. And according to Ice Universe, the S23 Ultra will be the first smartphone from Samsung to feature its massive 200 MP ISOCELL HP1 sensor which initially debuted on this year’s Motorola X30 Pro flagship.

Additionally, Hemmerstoffer says Samsung is expected to officially reveal the upcoming Galaxy S23 flagship series by January or February 2023. Which may be true, seeing that the company has been launching its past flagships within this window for several years now.