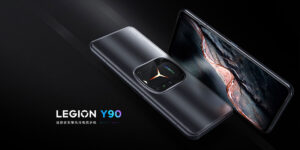 Along with the new Legion Y700, Lenovo also launched its latest gaming smartphone in China, which is officially known as the Legion Y90. It is worth noting that the company has discontinued using the “Duel” name starting with the third-gen model, in favour of using the more familiar Y Series branding that is commonly featured on its gaming laptops.

Besides the rebranding, Lenovo had also dropped several gimmicks from the phone’s predecessors, with the most notable omission being the side-mounted pop-up selfie camera. Instead, the Legion Y90 is presented as a more straightforward gaming smartphone that is more similar to those offered by rivals such as ASUS ROG, Black Shark, Nubia, and so on. Featured onboard the new device is an improved dual-fan internal cooling system, two USB-C slots, left and right shoulder buttons, and an unhindered display.

Specifically, the Lenovo Legion Y90 sports a flat 6.92-inch E4 AMOLED display with 2460 x 1080 pixel resolution, 144 Hz refresh rate, 720 Hz touch sampling rate, and HDR10+ support. Under its hood is Qualcomm’s latest Snapdragon 8 Gen 1 flagship chipset, coupled together with up to a whopping 18GB of RAM and up to 640GB of internal storage (UFS + SSD for the top-end configuration).

The gaming phone also features Wi-Fi and Bluetooth 5.2 support, 5G connectivity, dual speakers, RGB lighting on its back, Android 12 via Lenovo’s ZUI 13 interface, and a massive 5,600 mAh battery with 68W fast charging support. The latter enables the phone to be fully charged in just 38 minutes when utilising both USB-C ports, the company claims.

Situated on the phone’s rear island, alongside the cooling system and RGB logo, is a dual camera setup consisting of a 64MP primary sensor and a 13MP ultra-wide lens. Meanwhile, housed within the front display’s upper bezel is a 16MP camera for selfies, video calls, and even live streaming.