Lenovo intends to launch two new mobile devices to its Legion gaming brand; one of which being a smartphone known as the Legion Y90, while the other is a tablet known as the Legion Y700. Earlier today, the company dropped a short teaser video on its official Weibo page, finally providing a first look at its upcoming gaming phone.

As seen in the video, the Y90 features a similar rear design as the Legion Phone Duel 2, where its dual rear camera setup, a thermal vent, and the brand’s logo are situated in the middle of the case. However, rather than featuring a partitioned design like the latter, the newer gaming smartphone is shown to feature a more sleeker look. Also visible on the right-hand side of the device are two additional vents for its onboard cooling system, as well as a power/lock button situated in between them.

By now, you may have probably noticed that the Legion Y90 is lacking the Duel series’ signature side-mounted popup selfie camera module, which has been replaced by the aforementioned vents and lock button). This is because the phone actually comes with a front-facing camera on the upper bezel of its display, much like the ASUS ROG series and the Xperia phones by Sony. This also means that it will feature a lower screen-to-body ratio than the Duel series, but would still offer an unobstructed view due to the lack of a notch or punch-hole cutout which are a norm for current smartphones. 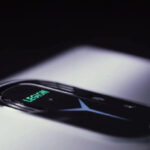 Unfortunately, Lenovo are still keeping the phone’s specs under wraps at this time. Unofficial sources, on the other hand, claim that the Legion Y90 is expected to feature a flagship Snapdragon chipset, a 6.92-inch AMOLED display with 144Hz refresh rate, LPDDR5 RAM, and UFS 3.1 storage.

As for the Legion Y700 (shown above), Gizmochina reports that Lenovo product marketing director Lin Lin recently confirmed via Weibo that the gaming tablet will feature a Snapdragon 870 chipset. Earlier teasers revealed the device to feature what appears to be a metal rear case, along with a dual rear camera setup.

Lin also mentioned that the Y700 will come with a Ultra-Wide Viewing Mode which changes the aspect ratios of certain mobile games to 21:10. This enables it to display more content width-wise, but at the cost of cropping the upper and lower parts of the screen. Both the Lenovo Legion Y90 and Legion Y700 were expected to be unveiled during this week’s CES 2022, but neither made an appearance. Given the number of teasers released as of late, it is possible that we may hear an announcement from the company sometime soon.

The post Lenovo Shows Off The Design For Its Upcoming Legion Y90 Gaming Smartphone appeared first on Lowyat.NET.