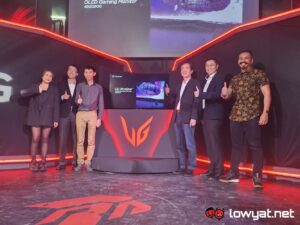 LG Malaysia is officially bringing its new UltraGear 2022 gaming monitors lineup into the country. The monitors, which first made the news back in May this year, include two products that are available in two different panel sizes, 32-inches and 48-inches.

Sitting at the top of the pedestal is the UltraGear 48GQ900, LG’s largest and most premium model of the trio. Specs-wise, the monitor uses an OLED panel that measures 47.5-inches and boasts a 4K resolution. Additionally, it also has a variable refresh rate of up to 120Hz as the standard, but that can be ramped up to run at 138Hz. It’s also got a 0.1ms GTG response time, HDR10 support, and is also an NVIDIA G-Sync Compatible and AMD FreeSync Premium monitor.

As for the 32-inch UltraGears models, LG seems to only be bringing in one model, and that is the 32GQ850. This model sports a Nano IPS panel with ATW Polarizer, as well as a screen real estate of 31.5-inches across.

Other specifications of the UltraGear 32GQ850 include a QHD (2560 x 1440) resolution with a DCI-P3 of 98%, along with a variable refresh rate up of 240Hz but like its 4K brethren, it can be overclocked to run at 260Hz via the monitor’s onboard settings.

The UltraGear 32GQ850 also has a GTG response time of 1ms and also supports VESA DisplayHDR 600. For its Adaptive Sync, LG has also ensured that the monitor is both G-Sync Compatible, FreeSync Premium Pro, and VESA Adaptive Sync compatible, so regardless of your GPU, their anti-tearing technology should work just fine.

In terms of price, the LG UltraGear 32GQ850 retails for RM3150. On a sidenote, the Korean brand also announced that its GF monitors, the 24GQ50F and 27GQ50F, will also be available in the country, Both monitors will retail at an SRP of RM765 and RM934, respectively.