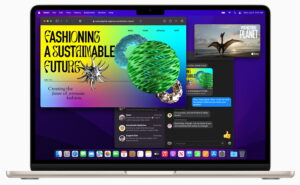 While we are already aware that Apple is planning to release its new M2-based MacBook Air in Malaysia this month, it is only today that the company has finally revealed when exactly it will begin to accept orders for the new laptop.

In an update to the Apple Malaysia website, the company noted that Malaysian consumers will be able to place their order for MacBook Air M2 starting this coming Friday, 8 July from 8:00 PM onwards. We have yet to receive information on when exactly consumers can purchase the laptop from Apple Authorized Resellers but given this revelation, you are most probably able to do it very soon as well.

In terms of the shipping date, Apple didn’t specifically mention it on the Malaysian website. However, the company has noted in a media release that the MacBook Air M2 will be arriving to customers all across the world on 15 July which we assume applies to Malaysia too.

As per what we have covered in our previous reports, the starting price for the MacBook Air M2 in Malaysia is RM5,499 which is inclusive of the 8-core GPU variant of the chip alongside 8GB of unified memory and 256GB solid state drive. It also comes standard with a 30W USB-C power adapter but there is an option to upgrade the power brick to the 67W USB-C power adapter for an additional RM80.

This adapter allows users to utilize the MacBook’s fast charging feature that would enable them to gain 50% of the laptop’s battery with just 30 minutes of charging time. However, customers can also choose to have the 35W dual USB-C power adapter instead which would provide the ability to charge an additional device such as iPhone or iPad at the same time.

If you are getting the variant with 10-core GPU and at least 512GB SSD, you can choose to get either of these power adapters without any additional charges. As a reference, these chargers cost RM239 each at Apple Malaysia’s online store when purchased separately.

Enough about the power adapters, so how about the maximum specs that you can get for a MacBook Air M2? That would be the version with a 10-core GPU, 24GB memory, and 2TB SSD which has a price tag of RM10,699.

On a related note, the other M2-based release which is the MacBook Pro 13 already been available on Apple Malaysia’s online store since late last month. You should be able to get it from the nearest Apple Authorised Resellers as well but it is always good to give them a call first to check for the laptop’s actual in-store availability.

The post MacBook Air M2 Pre-Order To Begin In Malaysia On 8 July appeared first on Lowyat.NET.