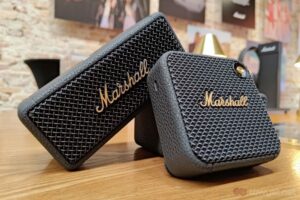 Late last month, Marshall announced the launching of its Emberton II and Willen portable speakers. But at the time, the company was not ready to share local pricing and availability details. Now though, local distributor ASH Asia has announced that both are now available for purchase.

The announcement was made via the company’s official Facebook page. Said post also links to the brand’s official store on Shopee, where you can get both Marshall portable speakers.

As a refresher, both the Marshall Emberton II and Willen connect to your mobile device via Bluetooth 5.1. To get access to their equalisers, you’ll have to get the Marshall Bluetooth app. Both new models come with the ability to daisy-chain multiple units together, and both have an IP67 rating so that you can take them nearly wherever you want. Both also come with a USB-C port.

Then there’s the battery life of these portable speakers. Naturally, the larger Marshall Emberton II comes with a higher capacity battery, giving you up to 30 hours of continuous playback, which you can get with just three hours of charging. In a pinch, a 20-minute charge time can still give it four hours of playback time.

The smaller Marshall Willen, by contrast, only has a battery that gives it 15 hours of playback, but retains the three-hour charge time. The 20-minute quick charge also gives slightly less playback time a three hours.

For their prices, the Marshall Emberton II is priced at RM959, while the Willen is priced at RM499. Both are already available via the aforementioned official store on Shopee, which you can get to via the link below.