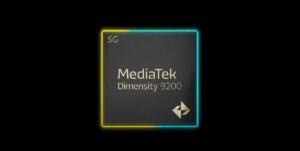 MediaTek officially launched the Dimensity 9200, its latest flagship chipset. As you’d expect, it is the official successor to the Dimensity 9000 SoC and comes loaded with new and improved features for the next generation of mobile devices.

Among the latest features of the Dimensity 9200, the chipset is based on TSMC’s 4nm process and is the first of its kind to integrate ARM Cortex X3 CPU with speeds in excess of 3GHz, as well as the first to feature ARM’s Immortalis-G715 GPU, complete with a hardware-accelerated ray-tracing engine. In addition, it also packs MediaTek’s HyperEngine 6.0 Gaming technology, something that the chipmaker claims will provide fast, fluid action, for a better, more immersive gaming experience on mobile.

Other specifications of the Dimensity 9200 also include an increase of 30% in power saving via AI-NR, as well as 45% power efficiency with the AI-SR in all visual applications. Further, the chipset also carries a new 6th generation AI Processing Unit, or APU 690, which include up to 35% faster performance in the ETHZ5.0 benchmark, compared to its predecessor.

The Dimensity 9200 can also boast being one of the first mobile chipsets that is Wi-Fi 7 ready, with capabilities of supporting up to 6.5Gbps downlink and uplink speeds. Adding to that is an advanced built-in 5G modem with AI, along with a suite of other intelligent connectivity enhancements. On that note, it is also able to deliver seamless 5G experiences, switching between long-reach sub-6GHz and mmWave connections.

Lastly, the Dimensity 9200 supports the chipmaker’s Imagiq 890 ISP, promising improved low-light imaging and camera performance. This is also coupled with features such as AI motion unblur technology and the chipset’s APU.

MediaTek’s Dimensity 9200 chipset is already being sampled out to partner brands and should start showing up in mobile devices by the end of this year. At the time of writing, it is still not clear which brands and their respective devices will be the first to use this flagship SoC.