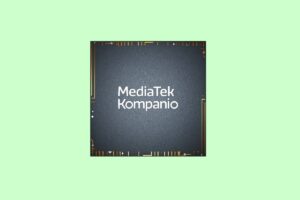 MediaTek recently made the existence of its Kompanio 1380 SoC official. The chipset, which first made an unannounced appearance last year in a Google Chromebook, is said to have been designed for high-end Chromebooks, with the chipmaker sharing more details about it.

Specs-wise, the Kompanio 1380 is based on TSMC’s 6nm process, and comes with an octa-core CPU, comprising four ARM Cortex-A78 cores running at 3GHz, and four ARM Cortex-A55 cores running at 2GHz. For graphical burdens, the chipset is also equipped with an ARM Mali-G57 MC5 GPU. Further, the chipset will support quad-channel 2133Mhz LPDDR4x memory, and includes MediaTek’s APU 3.0. Designed to aid with AI camera and AI voice applications.

At the time of writing, MediaTek did not say which high-end Chromebooks models will be powered by the Kompanio 1380 but the chipset is expected to go up against other ARM-based offerings, such as Qualcomm’s Snapdragon 7c.