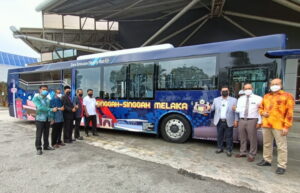 Melaka state government earlier this week has launched a new bus service called Singgah-Singgah Melaka that focuses on several popular tourist locations. Managed by the state-owned bus operator, Panorama Melaka together with WSH Automotive, the new service involved the usage of seven electric buses although only one will be operational at first.

The route which starts and ends at Melaka Sentral covers Melaka Zoo, Quayside, Taming Sari Tower, Submarine Museum, and Dataran Klebang. With the aim to serve around 290,000 passengers per year, the hop-on hop-off bus service is currently available for free until the end of May 2022.

It is rather an interesting move by the state which has already embarked on the electric bus journey back in 2015. The original plan was said to involve 40 electric buses from Shanghai Automotive Industry Corporation but only two of them made their way to Melaka before they were discontinued in 2018 as part of a cost-cutting exercise by Panorama Melaka.

These electric buses eventually ended up going through restoration at the Faculty of Electrical Engineering in Universiti Teknikal Malaysia Melaka (UTeM). However, it is not known if the Melaka state government has any plans to put back these buses into active service.