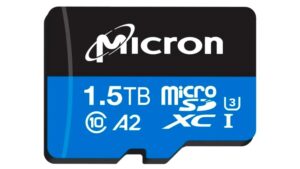 Back in early 2019, Micron and SanDisk released their 1TB microSD cards. These were the microSD cards with the highest capacity, and would remain so until recently, when the former announced a new one. This is the new highest-capacity microSD card, with 1.5TB of storage space.

Marketed as being designed for industrial-grade video security, Micron says its new i400 microSD cards are made with the company’s 176-layer 3D NAND process. Which is similar to the tech used in SSDs, in case you were thinking that sounds familiar.

So what makes these new Micron microSD cards so special, beyond the massive 1.5TB capacity? To start, the company claims that these cards can store up to 120 days of footage, though no details on resolution or framerates were provided for added context.

Beyond that, the company claims that these cards can also “concurrently handle 4K video recording and up to eight AI events per second”. Examples provided for these being object detection and classification like license plates or facial recognition.

As for their longevity, Micron claims that these 1.5TB microSD cards have a two-million hour mean time to failure. This translates to about 228 years of use.

Micron has not revealed details of when exactly these 1.5TB microSD cards will go on sale, or what their prices will be like. Though what is clear is that these are not meant for your average consumers, and they will likely have enterprise-level pricing to match. Which will probably be further exacerbated by the ongoing chip shortage.

For the average consumer, the Samsung PRO Endurance series of microSD cards would likely be the more viable alternative. This series caps out at 16 years of continuous recording and playback, and has a maximum capacity of 256GB. But at the same time, they launched with a price of US$54.99 (~RM242), which isn’t too out of reach.