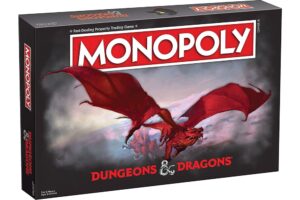 Monopoly as a board game has had many licensed editions, some of which make very little sense. There’s a new one to add to the list, and this time it’s the Dungeons & Dragons edition.

For the most part, Monopoly: Dungeons & Dragons works just like any other version of the board game. You buy and develop property on plots of land, and then charge others rent if they have the misfortune of landing there. You’re free to trade (read: buy or sell) them with other players as well.

Heed the call to capture monsters from across the Forgotten Realms in MONOPOLY: Dungeons & Dragons! Buy, sell, and trade traditional and modern iconic and deadly monsters like the Beholder, Storm Giant, and infamous Demogorgon to nerf the competition.

So to start, you buy monsters and develop property on them. Then there are things that don’t make sense in the high fantasy universe of DnD, like the obligatory “free parking” tile. At the very least some tiles are repurposed to be more setting-friendly, such as the Railroads being dungeons. On the flip side though, the adventurer figures look pretty good, and according to PC Gamer, they are all cast pewter types.

For now, the Monopoly: Dungeons & Dragons edition board game are only listed in two places. One is the website of The OP, also known as USAopoly, the licensees of the Monopoly brand. Here, it is listed at US$44.99 (~RM207), but there’s no shipping outside of the US here. The other option is Amazon, which lists it at US$38.59, with a US$18.30 shipping fee which brings the total to about RM261.

The post Monopoly Gets A Dungeons & Dragons Set appeared first on Lowyat.NET.