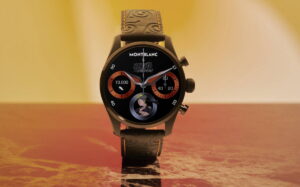 Even though Naruto’s manga and anime series ended their run years ago, the legendary ninja tale continues to be popular all over the world and many have credited it as their first foray into Japanese pop culture. Hence, you may spot new Naruto-themed collaborative products in the market every few months with the latest example being the Montblanc x Naruto collection.

Crafted in conjunction with the 20th anniversary of the Naruto manga series, leading the collection is a special variant of the Montblanc Summit 3 Smartwatch which was first announced to the world back in June. Among the watch’s highlights is its leather strap which has been embossed with the symbol of Naruto’s village, Konohagakure.

Naruto’s signature weapons have also been engraved on the watch’s bezel while the upper side button featured the Uzumaki clan symbol. On the lower side button, there is also the kanji character abura which means oil in English but is usually used as a reference to the Toad Sage in Naruto’s universe.

Aside from the wearable device, Montblanc has also crafted several other products as part of its new Naruto collection including pens, bags, belt, wallet, card holder, key fod, notebook, and even ink bottle. You can check them out over at Montblanc Malaysia’s website right here.