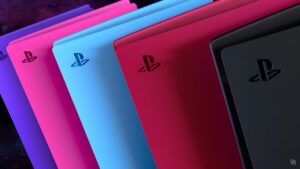 In addition to the default white, the PS5 currently has two additional colour options when it comes to its faceplates, or console covers to use the official name. These are Midnight Black and Cosmic Red, which were first announced back in December, going on sale a month later. The remaining three colours did not get listed, but now it looks like Sony Interactive Entertainment finally has a release date for them.

According to an update to the initial PlayStation Blog entry, SIE says that the additional PS5 faceplate colour options will be available starting 17 June 2022. If you need a refresher, these additional colours are Starlight Blue, Galactic Purple, and Nova Pink. No new prices were announced, but going by the initial announcement, these new colour options will have the same price of RM259, just like the first two.

So far, SIE has five additional colour options for both its PS5 DualSense controllers as well as the faceplates, in addition to the default white. First were the Midnight Black and Cosmic Red controllers, which were announced as early as June last year. The three controllers sporting the new colours were then announced at the same time as all five of the faceplates. But only two of the faceplates would be made available shortly after the announcement, mirroring the staggered availability of the controllers.

Previously, SIE said that these additional PS5 faceplate colour options will be made available within the first half of the year. Considering that they will only be available in the middle of June, that’s cutting it pretty close to the company’s own initial timeline.

Then there’s the matter of actual stock availability. As we reported, the Midnight Black and Cosmic Red PS5 faceplates were sold out on the day they became available for purchase. So if you’re interested in the three new colour options, just be prepared for the same to happen again.

The post More PS5 Faceplate Colours To Be Available From 17 June appeared first on Lowyat.NET.