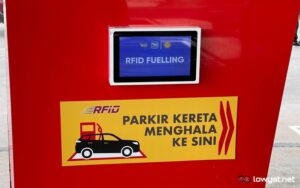 Last July, Touch ‘n Go and Shell kicked off the pilot programme for the RFID Fuelling feature at five selected Shell stations in Klang Valley. The pilot was supposed to last until the following month and the feature was never expanded to other stations but that has since changed.

As it turns out, quite a number of stations throughout Klang Valley have now supported RFID Fuelling. First reported by SoyaCincau, the rollout seems to be taking place in a rather quiet manner as the list of RFID Fuelling stations on both TNG and Shell Malaysia’s websites still showed the same five pilot stations at the time this article is published.

To those who are not aware of these stations, they are located at Mint Hotel, Taman Tun Dr Ismail, Bandar Sri Menjalara, NKVE Damansara, and Taman Connaught. One of the newly listed stations is Shell Federal Highway Route 2 which we have passed by earlier today and can personally confirm that RFID Fuelling is indeed supported by the station.

Located in Batu Tiga within the Klang-bound section of the highway, there is a sign at the station’s entrance that indicates the specific pump numbers that support RFID Fuelling. The RFID Fuelling implementation at this station utilized a screen that is mounted on a beam next to the pump instead of being on the ceiling like certain Shell stations.

Nevertheless, this station’s RFID readers are still up there. Below is the full list of Shell stations that have just begun to support the RFID Fuelling feature:

Together with the five pilot stations, the RFID Fuelling is now available at 35 Shell stations altogether throughout Klang Valley. If you are a TNG RFID user and already activated the RFID Fuelling feature, you can also see the newly updated list noted under the Stations tab inside the dedicated section for Shell within the TNG eWallet app.