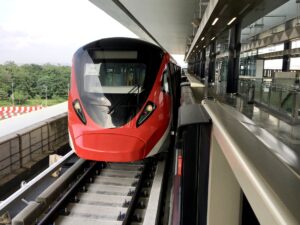 The MRT Corporation has revealed that Phase 1 of the long-awaited Putrajaya line will finally begin operating next month, after a long delay. The first phase was initially set to launch last August but was delayed to mid-November, which was then halted once again to finish safety trials that had been ongoing since April 2021.

As for the LRT, the Ampang Park station will be Putrajaya line’s only connection to the Kelana Jaya line. Commuters can interchange to the Ampang line at Chan Sow Lin and Titiwangsa, while those who need to use the Sri Petaling line have the options of either Chan Sow Lin or Sungai Besi.

The rest of the stations will open in Phase Two, which is set to start operating sometime in January 2023 and will complete the Putrajaya line. A total of 49 trains will run on its tracks with a capacity of 1204 passengers for each train.

A third MRT line dubbed the Circle line is set to be built to complete the Klang Valley Integrated Transit System, forming a loop around Klang Valley. It will begin partial operations by 2028 and is expected to be completed in 2030.