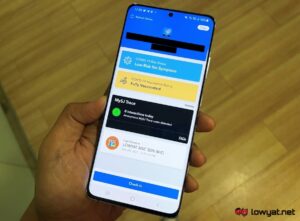 First made available to Huawei devices last week, Android users are now able to obtain the MySJ Trace feature for the MySejahtera app on their device. The new feature is being rolled out as part of the app’s v1.1.4 update.

In case you missed the original announcement, MySJ Trace utilizes Bluetooth to perform contact tracing for MySejahtera. In order for MySJ Trace to function, you have to allow MySejahtera to have continuous access to the location services and Bluetooth of your device though.

That being said, Health Minister Khairy Jamaluddin pointed out that all the data utilized by the feature have been anonymised. In a joint media release [pdf] by the Ministry of Health (MoH) and the Ministry of Science, Technology, and Innovation, it was also noted that the data can only be accessed by MoH and is kept within the user’s device for 14 days.

The implementation of MySJ Trace also marked the end for MySejahtera’s check-out feature which was introduced back in September. Interesting enough, we noticed that the MySJ Trace tab inside the Android app does not carry the beta label as per Huawei’s version.

To obtain the update, just head on to the MySejahtera page inside Google Play and press the update button once it has been enabled for your Android device. While the new update has been submitted to Apple for approval according to Khairy, it is still not yet available for iOS users for the time being.