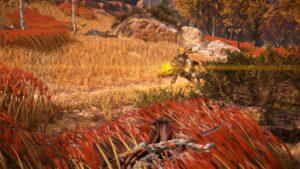 The Horizon series currently only consists of two entries, Zero Dawn and Forbidden West. But it looks like there’s a chance that there will be another to add to the list. And it’s one that will involve NCsoft, the publisher of Guild Wars and its sequel, which in turn may mean that this third game may be an MMORPG.

Korean News outlet MTN cites sources that claim both NCsoft and Sony Interactive Entertainment have “tentatively agreed” to a business partnership that allows the former to make use of the latter’s IP. The Korean company’s internal dev team will be working on making the game, according to the claim.

The report does not specifically mention MMO, but it’s not a stretch to imagine NCsoft making one, regardless of IP. After all, in addition to having titles like Guild Wars and Lineage under its umbrella, the majority of games published by the company, whether developed in-house or otherwise, are of this genre.

With the events of Horizon Forbidden West, the idea that an MMO taking place in this universe is not inconceivable. Consider this the spoiler warning for those who haven’t played the game, but with Aloy finding a small cache of her primary gadget the Focus, it’s not inconceivable that these would make their way to the hands of player characters. Even without the Focus, which drives the majority of the two games’ user interface, it’s not difficult to imagine a simplified one with a lot less information being shown.

Either way though, with neither NCsoft nor SIE making an announcement yet, this new game set in the Horizon universe is yet to be set in stone. Though if it does happen, one can only hope that the game is lucky enough to end up being good like Guild Wars 2, and not like the other MMOs published by the company.