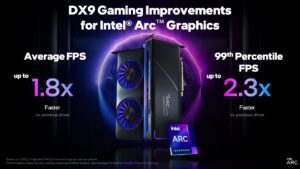 When Intel launched its ARC A-Series graphics cards back in October, its development team said that its priority was to ensure that gamers had a smooth and immersive experience in titles that ran on either the Vulkan or DirectX 12 APIs. Earlier today, the chipmaker announced that its latest November drivers for the A770 and A750 will deliver significant performance improvements for DirectX 9 (DX9) titles.

Intel says that its overhaul for DX9 on ARC will as much as 1.8 times better performance versus its October drivers, and up to 2.3 times higher with the 99th percentile for games that run on the older API. One such DX9 title to benefit from the new drivers is CS:GO, primarily because both the A770 and A750, at launch, were only able to manage a paltry average framerate of 150 fps.

Now, that average frame count may not sound as bad to some of us, but when the GPUs of Intel’s two major rivals are able to churn out between 300 and 400 fps without breaking a sweat, that disparity in performance will no doubt be a sticking point for DX9 titles like CS:GO. With the latest graphics drivers, owners of the ARC A770 and A750 should see their average framerates in-game hitting that coveted 300 fps average, both at Full HD and 1440p.

Of course, CS:GO isn’t the only DX9 title that will benefit from this performance boost. Other titles that are able to share the same uptick in frames include League of Legends, Starcraft 2, Guild Wars 2, Stellaris, Payday 2, and Moonlight Blade.

For all the good that Intel’s latest ARC drivers provide for DX9 titles, it doesn’t detract from the fact that the long-time CPU maker still has some ways to go before its Alchemist-powered graphics cards can actually go toe-to-toe, either with AMD or NVIDIA. Nevertheless, the chipmaker’s latest efforts are a good sign and that the chipmaker is definitely on the right path on becoming the viable third GPU option it wishes to be.