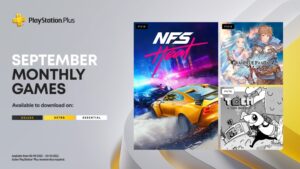 A good way to start the month of September 2022 is to find out what free games Sony Interactive Entertainment is giving to PS Plus subscribers. Sure, we don’t get a bonus fourth game this time around, but the lineup for the month is decent at least, so there’s that.

Probably the game most people will recognise from this list of free games for PS Plus subscribers is Need for Speed Heat. It will probably come as no surprise to anyone that the story is middling at best, and that all the game has going for it is the gameplay. Which, even then, is questionable at times since the game inherits NFS Rivals’ annoying mechanic of double-tapping the accelerator to drift. Fortunately this can be changed to “brake to drift” if you prefer.

Next on the list of games for PS Plus subscribers can claim for free is a niche title in the already niche genre of fighting games – Granblue Fantasy Versus. On one hand, since it’s being made by Arc System Works, one of the titans in the genre, it’s safe to say that gameplay is pretty good.

On the other though, the name Granblue Fantasy will probably mean nothing to most people, unless you already play the mobile gacha game. Even if you watched the anime, this game has so many more characters that appeared in the mobile game but not the TV show that it can be hard to find them interesting outside of pure gameplay values. The worst part though is that this game still uses delay-based netcode rather than rollback netcode.

Last on the list of free games for PS Plus subscribers is TOEM, the only PS5 title of the bunch. Though being an indie game with relatively simple graphics, it’s also probably the one that least needs the newer console’s processing power and SSD storage. It’s described as a hand-drawn adventure game, and as such has its own unique charm that the other two games above do not.

The PlayStation Plus Monthly Games and Game Catalog lineup for September has been revealed. Highlights include Need for Speed Heat, Toem, Deathloop and Assassin’s Creed Origins.

Get a preview below and find out the full lineup here: https://t.co/8rKfKh9EJX pic.twitter.com/Xr27McRJvo

You can claim these free games for PS Plus subscribers starting 6 September 2022. If you haven’t claimed last month’s list, starring Yakuza: Like A Dragon and THPS 1+2, then be sure to do so before then.

The post NFS Heat Leads The Lineup Of PS Plus Free Games For September 2022 appeared first on Lowyat.NET.