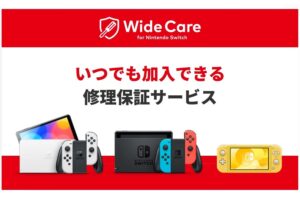 While not particularly frail, the Nintendo Switch was the first of the modern consoles to have cases of stick drift on its Joy-Cons widely reported. Of course, the handheld console hybrid is also susceptible to other forms of damage. To some benefit of users, at least in its home market in Japan, the company has launched what is called the Wide Care subscription service.

From the subscription service’s page, sounds like a form of extended warranty. It’s one that can be subscribed to at any time, and those who do can claim up to six repairs a year totaling up to JPY100000 (~RM3259). Though only two of the six repairs can involve the main body of the Nintendo Switch.

While we’re on the subject, beyond the main body of the handheld, the Wide Care subscription service also covers the Joy-Con controllers, the dock, and the power adapter. The first two naturally doesn’t apply to the Nintendo Switch Lite, which has integrated controls and doesn’t support the dock. The subscription service is also doesn’t cover any other accessory, so it’s strictly limited to what came in the box when the handheld was bought.

Interested Nintendo Switch owners in Japan can also pay for this subscription in two ways. Which is either JPY200 (~RM6.52) monthly, or JPY2000 (~RM65.18) annually. The former can only be subscribed to if the Switch is still within the one year warranty period. This makes the yearly subscription better not only in that it has an inherent two-month discount, but can be subscribed to at any time.

Overall, this Wide Care warranty looks to be very generous. Not only is the subscription more affordable than a Spotify subscription, it also covers natural breakdowns, water damage and accidental damage, which most warranties don’t cover. This really reflects the fact that the Nintendo Switch is meant to be a for children who are usually less careful than adult users.

All that being said though, this Wide Care subscription looks to be only available in Japan for now. It remains to be seen if it will be available elsewhere. Those who have experienced Joy-Con drift would definitely benefit from this.