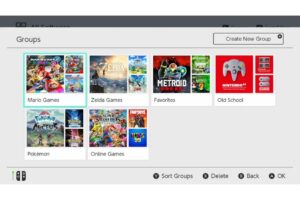 If you have a lot of games installed on your Nintendo Switch, finding the right one can sometimes be quite a hassle. But with the new firmware version 14.0 update, it will be a little less so. This is because the update gives the handheld console hybrid a feature that lets you group your games.

To make use of the feature, you’ll not only need to have the firmware update applied, but you’ll also need more than 12 games on your Nintendo Switch. When your Switch meets these conditions, scrolling all the way to the right on the home screen will bring you to the vertical list of all your games. From there, pressing L will let you access or create groups.

With the update, you’ll be able to make up to 100 groups, and each group can hold up to 200 titles. A single game can be part of multiple groups too, so you have some extra flexibility when it comes to sorting your games out in custom lists.

On one hand, having a way to organise your games is always a plus. But on the other, the fact that you can’t have these custom groups in the home screen is a little bit of a bummer.

(Source: Nintendo via The Verge)