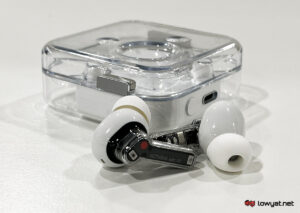 The official unveiling of the Ear (stick) isn’t the only announcement made by Nothing yesterday. The second reveal is regarding its first ever product, the Ear (1) TWS earbuds, but don’t get too excited just yet as this one will surely disappoint a lot of people.

In a tweet, company founder Carl Pei announced that the pricing for the Nothing Ear (1) will be increased to US$ 149 (~RM 703), equating to a 50% hike from its original price of US$ 99. The change will be made effective starting 26 October, the same day as the launch for the upcoming Ear (stick) earbuds.

On October 26, we’ll be raising the prices for Ear (1) to $149 due to an increase in costs. pic.twitter.com/jJDlaXzzJ6

Pei explained that the hike is due to an increase in costs which he later elaborated is related to manufacturing. GSMArena speculates that the company’s hiring of over 180 engineers soon after launching the Ear (1) last year may have contributed to the product’s price increase, but the Nothing founder refuted this in a reply on Twitter. He also took the opportunity to encourage would-be owners to purchase the earbuds before the change comes into effect.

The company did not say whether the increased input costs will affect its other product, namely the Nothing Phone (1) which currently retails for GBP 399 in the UK, or RM 2,399 in Malaysia. Speaking of which, we’ve reached out to Nothing’s local arm to see whether the pricing of the Ear (1) here would also be increased. In its reply, a company spokesperson clarified that the product will retain its RM 499 retail price for now, but will keep us posted if there are any changes.

Undoubtedly, the jump to US$ 149 for the Ear (1) is pretty drastic, so it is no wonder this change will undoubtedly spark outrage amongst consumers. Which is a shame, as its current pricing is one of the product’s main selling points, along with its surprisingly decent audio performance – both of which we highlighted in our review.

The post Nothing Ear (1) Pricing To Get 50% Hike Next Week appeared first on Lowyat.NET.