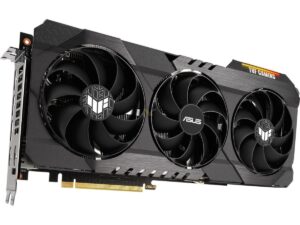 NVIDIA, along with its AiB partners, has quietly launched its updated GeForce RTX 3060 Series graphics cards into the market. To be clear, the new, updated GPUs include both the Ti and non-Ti versions of the card.

For the new versions of the RTX 3060 Ti, the new GPU model has been upgraded to run with the faster GDDR6X memory that runs at 19Gbps and in turn, also results in higher memory bandwidth, jumping from 448GB/s with the original GDDR6, to 608GB/s.

To that end, ASUS appears to be one of NVIDIA’s earliest AiB partners to release its variant of the card, under its TUF Gaming Series. Practically speaking, the new version of this RTX 3060 Ti is identical to the original SKU, save for the GDDR6X upgrade here. Further, there are both standard and OC versions of the card. In terms of clockspeeds, they are, once again, reportedly the same as their GDDR6 counterparts.

Under ASUS as well, there is also the new RTX 3060. Unlike its more powerful Ti sibling, the memory standard for this GPU is still the same GDDR6. However, instead of the usual 12GB of graphics memory, the newer model comes with 4GB less, which is 8GB GDDR6. Adding to that, it also has a reduced memory bus, from 192-bit to 128-bit, which means that its bandwidth is reduced from 360GB/s to 240GB/s.

So far, there are only two AiB partners that have released this version of the RTX 3060. The first is Manli, which is a brand we don’t get here, and then there’s ASUS, who is releasing it as part of its Dual Series lineup. Just like its TUF Gaming series RTX 3060 Ti, the card comes in both OC and non-OC flavours.

At the time of writing, neither NVIDIA nor its other AiB partners have given local availability or pricing.