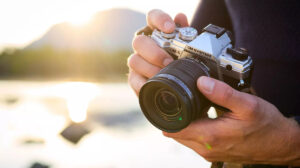 OM Digital Solutions has officially announced the OM System OM-5, its latest micro four thirds camera, which comes with a rugged body as well as a slew of photography and video based features. It is also the first product from its line-up to not feature the Olympus branding, a move that the company had intended to make after parting ways with its parent company back in early 2021.

As mentioned earlier, the OM-5 sports a highly durable body with an IP53 rating for dust and water resistance, and is claimed to be capable of surviving in temperatures as low as -10 degrees Celsius. It also comes with a Super Sonic Wave Filter system which is designed to reduce dust and dirt issues on the image sensor when swapping lenses.

Unlike the OM-1, the newer model sports a slimmer profile and features additional dials on its upper interface. In front is an OM mount for compatible lenses, while on the back is a 2.3 million-dot OLED electronic viewfinder and a 3-inch vari-angle 1.04 million-dot touchscreen. Connectivity-wise, the OM-5 comes with two SDXC compatible slots, a USB Micro-B port with USB charging capability, a Micro HDMI and a 3.5 mm microphone input, as well as Wi-Fi and Bluetooth 4.2 BLE support. Powering the camera is a removable BLS-50 battery pack which enables for 310 still shots and 60 minutes of video recording on a single charge.

Under its hood is a 20.4 MP Micro Four Thirds sensor, along with a TruePic IX Image Processor, 121-point hybrid phase and contrast-detect autofocusing (AF) system, and also a five-axis in-body image stabilisation (IBIS) system with 7.5 EV steps of stabilisation. The camera’s features both a digital and physical shutter which enables it to shoot between 1/8000 second and 60 seconds, and has an ISO sensitivity of 64 to 6400 (expandable up to 25,600). Video-wise, the OM-5 is capable of recording up to 4K resolution at 30 frames per second (fps).

In terms of features, onboard are several computational photography features such as the 50 MP handheld shot mode which merges multiple images to create a high-resolution image, and the Live Neutral Density (ND) mode which lets the camera achieve slow shutter speed effects in bright light. Other similar features include internal focus stacking, Pro Capture, Starry Sky autofocus, and more.

According to OM Digital Solutions, the OM System OM-5 is slated to ship out for certain markets in November at a recommended retail price of US$ 1,200 (~RM 5,658) for body only, and US$ 1,600 (~RM 7,544) when bundled together with the 12-45 mm F4 PRO lens. The company has yet to confirm whether the new Micro Four Thirds camera is expected to be available in Malaysia.