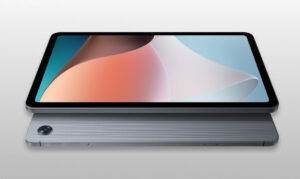 Launched alongside the Reno8 series in China earlier is the OPPO Pad Air, the brand’s second tablet. As you may recall, the new slate was previewed by the company last week, revealing only a handful of its expected key features. Now that the device is finally official, OPPO has been keen to share even more details regarding its specifications.

OPPO’s follow-up to its first tablet can be considered to be its mid-range offering in terms of specifications, while at the same time being a slightly smaller and lighter device as well. Though sporting a similar design to the base model, the Pad Air weighs at only 440 grams and features a 10.36-inch IPS LCD display with 2000 x 1200 pixel resolution and a refresh rate of 60Hz. It also comes with a quad-speaker system (two on each side) with Dolby Atmos, Android 12 via ColorOS 12, and Bluetooth 5.1 support. The company says there is no cellular connectivity option, meaning that the tablet is only offered with Wi-Fi connectivity.

Internally, the OPPO Pad Air is equipped with a mid-range Snapdragon 680 chipset, up to 6GB RAM and up to 128GB storage, and also comes with expandable memory support of up to 1TB via microSD. Powering the device is a modest 7,100mAh battery with 18W fast charging support through USB-C. And just in case you’re wondering, OPPO revealed that the tablet will come with its own charging brick and cable included in the box.

As with most slates out there in the market, don’t expect much from the Pad Air’s onboard imaging system. Found on its back is a lone 8MP rear camera, while situated on the side bezel of its display is a 5MP selfie shooter.

Besides that, the tablet also features support for accessories including the OPPO Pencil stylus and a proprietary keyboard cover – both of which are sold separately. For colour choices, the tablet is offered in either Star Silver or Fog Grey.