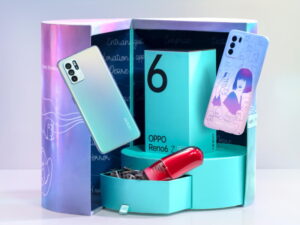 OPPO has collaborated together with the renowned Japanese cosmetic brand Shiseido to release yet another limited-edition bundle. This time around, the bundle revolves around the Reno6 Z that the company has launched back in August.

Previously, both companies have collaborated together for the F9 Starry Purple release in 2018. The new Reno6 Z Shiseido bundle does not involve a new colourway though as it will feature the existing Aurora option but nevertheless, the pack will still include a specially themed phone case and packaging.

In addition to that, the new bundle pack also includes a Shiseido cosmetic product worth up to RM450. The actual product would be provided on a random basis though in several forms including loose powder, lipstick, and serum.

According to OPPO, only 300 boxes will be made available to customers and they can pre-order them from 2 to 18 December for RM1,699 each which is similar to the price tag of a standard Reno6 Z. For more details, you can check out OPPO Malaysia’s official website.