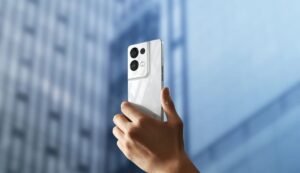 OPPO has recently launched its new Reno8 series of smartphones in China. Consisting of three different variants, the company made an interesting move where all three models are equipped with different chipsets. The OPPO Reno8 Pro, in particular, being the first device to debut Qualcomm’s recently introduced Snapdragon 7 Gen 1 mid-range mobile processor.

However, all three models do feature some similarities, especially in design. For the Reno8 series, OPPO has gone with the seamlessly integrated, left corner-aligned camera bump that is somewhat reminiscent of the non-Ultra variants of Samsung’s Galaxy S22 phones. Due to this, the new mid-range release lacks a rear lighting system, which is one of its predecessor’s highlighted features.

First on the list is the standard OPPO Reno8 trim. Display-wise, the phone is equipped with a flat 6.43-inch AMOLED screen with FHD+ resolution, 90Hz refresh rate, and a 32MP selfie camera housed within a punch-hole cutout. Under its hood is a MediaTek 1300 chipset, while on its back is a triple camera setup consisting of a 50MP primary, 2MP monochrome and a 2MP macro sensor.

Then we have the OPPO Reno8 Pro, which features a 6.62-inch AMOLED display with FHD+ resolution, a higher 120Hz refresh rate, and the same 32MP front-facing camera as its siblings. Powering the phone is the aforementioned Snapdragon 7 Gen 1 chipset, while featured on its rear island is a triple camera setup consisting of 50MP primary, 8MP ultra-wide, and a 2MP macro.

Last but not least is the top-end variant, the OPPO Reno8 Pro+. This model sports the largest display among the three, specifically a 6.7-inch AMOLED screen which, again, comes with FHD+ resolution, 120Hz refresh rate, and a 32MP selfie camera. Running the phone’s overall processing is MediaTek’s latest Dimensity 8100 MAX SoC, while situated on its back is the same 50MP primary, 8MP ultra-wide and 2MP macro camera setup as the regular Pro variant.