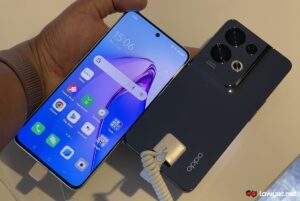 Alongside the Pad Air which is the company’s first tablet for our market, OPPO recently has also launched and kicked off the pre-order program for the Reno8 5G Series. As noted in our previous report, the series comprises two devices at the moment including the lead model, the Reno8 Pro.

One of the major highlights of the new phone is the fact that it carries MariSilicon X as Reno8 Pro is the second device to carry the in-house chip after the company’s flagship, Find X5 Pro. The 6nm chip acts as a dedicated image processor to help the phone deliver several features such as real-time RAW processing, 20-bit Ultra HDR, and 4K AI HDR Night Video.

Speaking about photography, the Reno8 Pro’s main camera relies on a 50MP Sony IMX766 sensor that is being paired with an f/.18 7P lens. The rear camera module also contains an 8MP f/2.2 ultra-wide camera alongside a 2MP f/2.4 macro camera.

OPPO didn’t ignore the front-facing camera too as the company has equipped a 32MP Sony IMX709 sensor for the phone together with an f/2.4 5P lens and autofocus capability. The camera is housed dead in the centre of the phone’s 6.7-inch Full HD 120Hz AMOLED display that is being protected by a layer of Corning Gorilla Glass 5.

An in-display fingerprint is also standard on the model although users can also opt for facial recognition as a biometric security option for their Reno8 Pro. Meanwhile, OPPO has equipped the device with MediaTek Dimensity 8100-MAX as its main processor.

Capping Reno8 Pro’s general specification is a pair of batteries that provided a total of 4500mAh battery capacity for the phone. Through an 80W SuperVOOC charger, Reno8 Pro can obtain back 50% of its battery capacity in just 11 minutes.

For those who wonder about the standard Reno8 variant, yes, it is coming to Malaysia too. Running on MediaTek Dimensity 1300 processor, this particular model has no MariSilicon X in it but still has the same 50MP tri-camera setup as per its Pro sibling.

The same goes for its 32MP selfie camera but OPPO somehow decided to remove the autofocus capability on the standard variant of Reno8 and the camera has been shifted to the left corner of the display too. Other features that the non-Pro model also shares with its higher-end sibling include the in-display fingerprint sensor, Corning Gorilla Glass 5 on its screen, a 4500mAh battery, and support for an 80W SuperVOOC charger.

The standard variant of Reno8 also has a smaller 6.4-inch Full HD 90Hz AMOLED display. Naturally, their price tags are different too.

Ahead of its public release on 30 July, both phones can now be pre-ordered directly from OPPO Malaysia’s online store. Pre-order customers for all Reno8 5G Series devices will receive several freebies including the equally new Enco Air2 Pro true wireless earbuds, RM150 discount for Pad Air, 1-year screen protection program, and My OPPO privileges worth RM888.

The post OPPO Reno8 Pro 5G With MariSilicon X Is Coming To Malaysia For RM3,499 appeared first on Lowyat.NET.