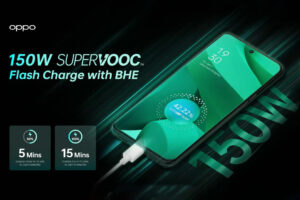 OPPO’s SuperVOOC has been behind in the world of fast charging with Xiaomi and Vivo introducing 120W speeds to their lineup. However, the company will soon steal the crown with the announcement of its new 150W charging, and it looks like they’ll remain at the top for quite a while.

The new 150W SuperVOOC standard claims to be able to charge a 4,500mAh battery from 1% to 50% in just five minutes and 100% in 15, which is faster than what most people take to get ready in the morning. Interestingly, rather than its own first-party devices, OPPO says that the technology will instead debut on a yet-unnamed OnePlus phone in the second quarter of this year.

The icing on the cake is the company’s Battery Health Technology (BHE), which extends the lifespan of smartphone batteries and promises that it will still be in good condition after four years. It claims that most phones can retain only 80% of battery health after 800 cycles, but BHE doubles the durability to 1600 cycles.

Moving forward, BHE will be implemented in all of OPPO’s and OnePlus’ mid-tier and high-end devices, while 150W charging will be featured in several future phones. Coincidentally, realme also announced its 150W SuperDart charging on the same day, coming to the realme GT Neo 3. This isn’t a surprise, seeing as how OPPO, OnePlus, and realme are all owned by BBK Electronics.

Following the announcement, the smartphone maker then proceeded to showcase an in-development 240W SuperVOOC charging that can fully charge a phone in nine minutes, beating out Xiaomi’s previous 200W demonstration, though it didn’t reveal a timeline on when we can expect it in consumers’ hands.