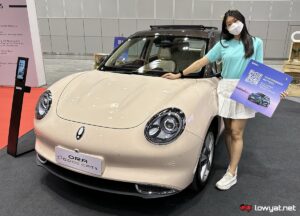 Its imminent arrival in Malaysia has been teased for so long but the wait is almost over. While its exact launch date is not yet known, you can now take a closer look at the Ora Good Cat EV throughout its first public outing in Malaysia.

The new subcompact EV is now currently on display at the Malaysia Motor Expo (MME) which is happening from today until this Sunday, 13 November at KL Convention Centre. Despite its appearance at MME, this does not mean that it has been launched in our market though.

The MME outing acts more like a showcase as Great Wall Motors (GWM) Malaysia has yet to announce the pricing and availability date for the Good Cat in our market. Nevertheless, visitors are able to book the vehicle during the event by placing a refundable deposit of RM 1,000.

All customers who book the Good Cat before 4:00 PM of 12 November at MME will be entered into a lucky draw whereby they will be in the running to win a discount voucher for the EV worth RM28,888. For those who are curious enough to know more and want to experience driving the EV itself, you can sign up for a test drive at the event although spots will be quite limited.

Do note that there is an admission fee of RM20 to enter MME though. That being said, the ticket is inclusive of access to the International Automodified Kuala Lumpur which features hundred of modified vehicles from all over the region.

Back to the Good Cat itself, the latest information that we received from the staff at the booth in MME is that the EV will be made available in Malaysia in three variants. This is instead of the four options that we mentioned in our report back in July.

However, only two of them – the 400 Pro and 500 Ultra – were highlighted in the latest Good Cat catalogue that was featured at the booth. The name of the variants themselves corresponds to the maximum range that each of them is able to deliver.

Specifically, the 400 Pro which is powered by a 47.79kWh lithium-ion phosphate battery is able to go up to 400km according to NEDC standards while the 500 Ultra with a 63.14 lithium-ternary battery maxes out at 500km. Regardless of the variants, both of them have a 105kW front-wheel-drive motor that can deliver up to 143PS of power and 210Nm of torque.

As mentioned earlier, the Malaysian pricing of the Good Cat has not yet been revealed by GWM although it is expected to be between RM140,000 to RM160,000. For more information regarding specific differences between the 400 Pro and 500 Ultra of the EV, check out the digital version of the catalogue right here.

The post Ora Good Cat EV Made Its Public Debut In Malaysia appeared first on Lowyat.NET.