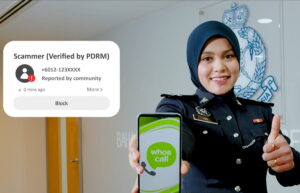 PDRM’s Commercial Crime Investigation Department (CCID) has announced a new partnership with the Whoscall app in an attempt to curb cases of online scams. Developed by Taiwanese developer Gogolook, the app provides a caller identification service which is similar in nature to the Truecaller app.

According to CCID Director Kamarudin Md Din, the app will be able to provide verified information to users regarding their phone calls. Specifically, this strategic partnership will see Whoscall use the PDRM’s Semak Mule CCID System database to flag calls by known scammers.

“This allows users who download this application on their mobile phones to decide whether they want to answer the call received or otherwise,” said the director. The police are also attempting to raise awareness about online fraud amongst students with an anti-scam song titled “Be Smart Stay Alert” by local musician Lenny Ooi Teck Wai and yes, they have even made a music video for it.

Gogolook claims to have the largest phone number database in East Asia and Southeast Asia with 1.6 billion entries, with the Whoscall app exceeding 100 million downloads last year. The app is currently available in 31 countries and aside from the Malaysian police, has partnered up with police agencies in several countries for anti-fraud efforts, including Taiwan, South Korea, Japan, and Thailand.

Aside from caller identification, the app can also filter SMS messages by detecting suspicious URLs and keywords. Users can also report phone numbers that they believe to be dangerous or belong to scammers as well as key in numbers that they find suspicious to manually identify such threats from Whoscall’s database.

Kamarudin stated that Malaysia saw a slight decrease in online fraud cases last year with 20,041 cases compared to 20,701 cases in 2021. That being said, the number of arrests and losses increased last year with 13,371 arrests with a loss of more than RM684 million. This is significantly more than 2021’s arrest and losses figures at 9,991 and RM560 million respectively.

The post PDRM Partners Up With Whoscall App To Curb Online Fraud appeared first on Lowyat.NET.